The NCAA’s ruling earlier this week to give seniors an additional season of eligibility—without counting against the roster limitation—means more players on virtually every college baseball team in 2021. And while all agree with Monday’s decision in light of the virus’s canceling the spring season, many coaches are searching for extra space in their cozy confines. That includes Texas State coach Steven Trout, whose 10 returning seniors will give him as many as 45 players next spring. “We’ve got some catcher lockers that are bigger so we can double up,” Trout laughs. “We’ll have to get creative.”

Locker room space is low on the priority list for many coaches, but it is a tangible example of how college baseball is being impacted by the coronavirus pandemic. Sure, most of the focus is on the status of the 2020 football season and the cancellation of money-making March Madness, but college baseball is feeling the outbreak’s effects as well—both the good (yes, there’s good) and bad.

Given the combination of seniors returning and a truncated MLB draft, players destined for minor league ball next year will instead play in college. Coaches estimate that more than 300 college juniors and hundreds more high school seniors will play college ball if the draft is shortened from 40 to five rounds, as many expect. “You’re going to have more good players stay in college and more good players go to college,” says Jim Schlossnagle, in his 17th year as head coach at TCU. “College baseball has a chance to play at a level we haven’t seen before.” 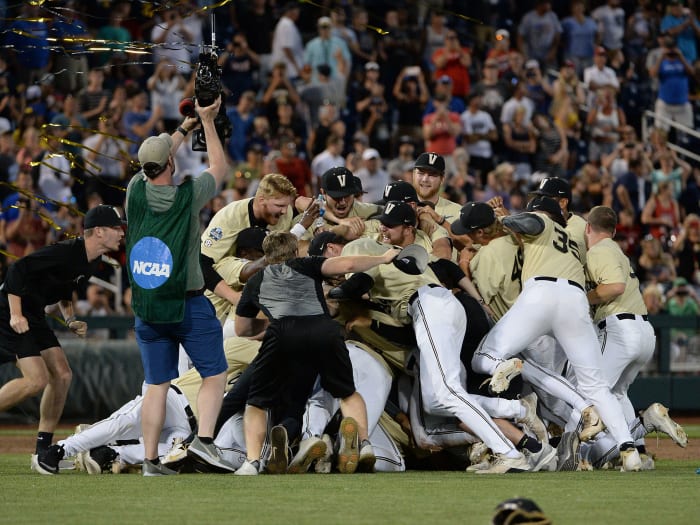 And now for the bad. While the NCAA’s decision Monday granted seniors an exception, coaches still must adhere to a 35-man roster limitation for all other players. Coaches who signed large recruiting classes to replace outgoing draftees are suddenly stuck with too many players. That includes both juniors as well as draft-eligible incoming freshmen who coaches signed despite projecting they’d go pro (a normal practice in the world of college baseball). “Everybody is going to have more players than spots,” says Craig Keilitz, executive director of the American Baseball Coaches Association. “Power conference schools might think they’d lose eight (signees) to the draft in a 20-person class, and they know they’re losing, say, eight juniors to the draft. All the sudden, they are a plus-16. They’re sitting back going, ‘Oh my gosh. What are we doing to do now?’”

There is only one choice: cut players. In baseball, this is an annual practice, trimming a roster to meet the NCAA’s 35-man limit. Rosters often narrow through normal attrition (transfers, ineligibility, etc.), or players are nudged to find other schools. In any given year, one to three players can be encouraged to leave a program. But this year? The number might inflate to double digits at many baseball blue bloods, tradition-rich clubs that attract the best talent. “That’s not the way it should be,” says Ray Tanner, the former championship-winning baseball coach at South Carolina who now presides over the athletic department as AD.

Tanner believes the NCAA could have done more to help both coaches and players by granting a one-year relief that would eliminate, for just one season, restrictions on roster and scholarship limits, setting them on a per-team basis. All those on a team’s 2020 roster and 2020 signing class members, however many, would be allowed to remain on the team. The same goes for all scholarship monies promised to those players. “You shouldn’t put a coach in a position where he’s got to trim his roster like this,” Tanner says. “These are unprecedented circumstances we’re going through.” The NCAA rule change was a blanket eligibility adjustment for all spring sports. Baseball is a square peg trying to squeeze into a round hole. “The NCAA did a one-size-fits-all approach, and I don’t blame them,” Florida AD Scott Stricklin says, “but baseball, because of the draft, doesn’t fit in a box.”

Coaches are already dreading the tough decisions. At one blue blood, LSU coach Paul Mainieri assumed he’d lose as many as eight third-year players to the draft and another four signees. That’s 12 extra players he must account for on his roster. “More really good players are going to come to college, but you have to make room for them when you really didn’t anticipate having those guys,” he says. “It’s going to be a real delicate thing.”

Why do coaches sign players they know are draft-bound? Because you never really know until a player signs or the deadline to sign passes. Unlike with football, a baseball player can return to school after being selected. Many times, a decision rests on the amount of signing bonus an MLB team offers. First-rounders are normally shoo-ins to sign, but bonuses in other rounds are difficult to predict until draft day. More than any other group of college coaches, those in baseball are adept at building a roster in the same way a pro sport general manager would. They must project their draft-eligible players’ futures– including the signees—while constructing a roster that adheres to the 35-man limit and stringent scholarship policies: spreading 11.7 scholarships over 27 players (they are allowed eight walk-ons to reach the 35).

Many of them have it down to a science. “If there was any group of coaches that can handle this, it’s the college baseball coaches,” says Dan McDonnell, in Year 14 at Louisville. “Some signees might be steered away before they even get on campus. It doesn’t mean it can’t work out for this kid. Baseball mirrors life and curveballs are a part of it.” McDonnell recruited this year with the expectation that he’d lose as many as seven juniors to the draft. Now, he estimates in a five-round draft that only three or four juniors will get selected. This year’s shortened draft could have as few as 100 picks. Last year’s full draft had more than 1,200. “How do we incur four more guys and four more guys on scholarship?” he says. “Someone on the outside might say, ‘You shouldn’t have spent their scholarships money!’ I’ve been doing this 27 years. I have to go on those 27 years. I have a real good idea of who is signing. They’re going to pro ball and a freshman will come and take that spot.” 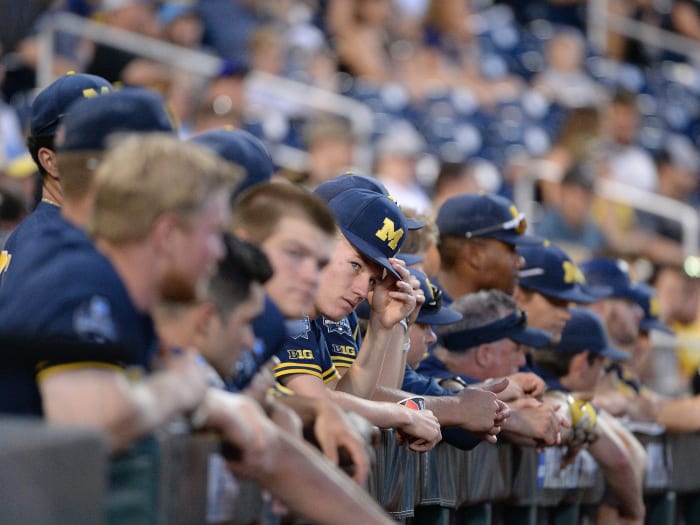 There are subtle ways to nudge players to another spot, coaches say. The easiest and quickest: show players and their parents where they stand on the depth chart. Do you want more playing time? Well, you might need to find another school. “It’s not going to be easy,” Schlossnagle says. “There’s going to be some super uncomfortable conversations.” There is another wrinkle. The NCAA could pass legislation this summer allowing players to transfer within Division I and play immediately instead of sitting out a season, as required now. For those players bumped from a school, the rule is well timed, coaches say, but it’s likely to ignite a domino effect: the players cut by top schools dropping to the next tier and those schools cutting its own players to make room for transfers and so on.

Some will leave schools based on scholarship money alone. Seniors next year can receive the same or less scholarship aid as they did this year without counting against the 11.7 scholarship figure. However, the NCAA has left it at each school’s discretion to award additional scholarship money. Many programs, especially those under a financial burden, are not expected to offer extra aid. College baseball is not a money-making sport. In fact, the NCAA believes that only about 5% of college baseball programs turn a profit. Schlossnagle believes that roughly half of Division I schools already don’t offer the full 11.7 allowed. “A lot of guys have said their ADs have already told them, ‘You’re not going to get any more money. Figure it out,’” says John McCormack, the 12th year coach at Florida Atlantic. “You can go raise some money, but that’s probably a long shot these days with the economy. ‘Hey I need some more money because my third baseman is coming back to school.’ ”

Plenty of schools lose money on baseball, even those so-called blue bloods. Take the SEC, arguably the sport’s most elite conference. Only four baseball programs in the league (LSU, Texas A&M, Ole Miss and Arkansas) turned a profit in 2017, according to financial documents provided by schools. That same year, each SEC baseball team spent an average of $470,000 on financial aid. Aid is even more expensive for private schools. Average tuition at TCU is about $25,000 a semester, double or triple what it is at many public universities. Schlossnagle has eight seniors, all of whom wish to return and most of whom are on at least part of a scholarship. “It’s money that has to be raised or sent. It’s a check that has to be written by somebody,” he says.

Meanwhile, back at Texas State, Trout is completing his first calendar year as head coach. His team was on a seven-game win streak and about to enter conference play before the virus stopped everything. Now the 35-year old is dealing with the aftermath—the roster numbers, the additional financial aid, locker room space and, like us all, the spread of the virus. “Part of all this is how far COVID-19 is going to go,” he says. “Is it going to go into the fall? Depending financially on how the university does, that can affect athletics.”

Elite Baseball | Leading in Baseball Development in the Entire Mid-Atlantic

ELITE BASEBALL IS THE LEADER IN BASEBALL DEVELOPMENT IN THE ENTIRE MID-ATLANTIC Elite Baseball is committed to bringing quality professional instruction and advisement to baseball players of all ages. We boast the highest level of instruction for every aspect of the game. From basic skills such as hitting and pitching, to physical conditioning, vision training, […]