Preston Wilson read the statement and thought: That took too long, and it didn’t say enough.

Nine days after police officers in Minneapolis killed George Floyd and the Black Lives Matter movement overtook the headlines, Major League Baseball became the last major U.S. professional sports organization to speak out. “Our game has zero tolerance for racism and racial injustice,” its statement read in part. “We will take the necessary time, effort and collaboration to address symptoms of systemic racism, prejudice and injustice, but will be equally as focused on the root of the problem.” Its tweet added, “We want to be better, we need to be better, and this is our promise to do the work.”

The statement “definitely could have been stronger,” says Wilson, a Black former All-Star center fielder, now 45. He was disappointed to see that it did not contain the words police brutality. “When you try to call out something but don’t name it, you’re not really doing anybody any good,” he says. “It’s like when you know something is racist and you hear the reporter say ‘racially charged.’ Until we can say these things, we’re gonna keep spinning our wheels.” 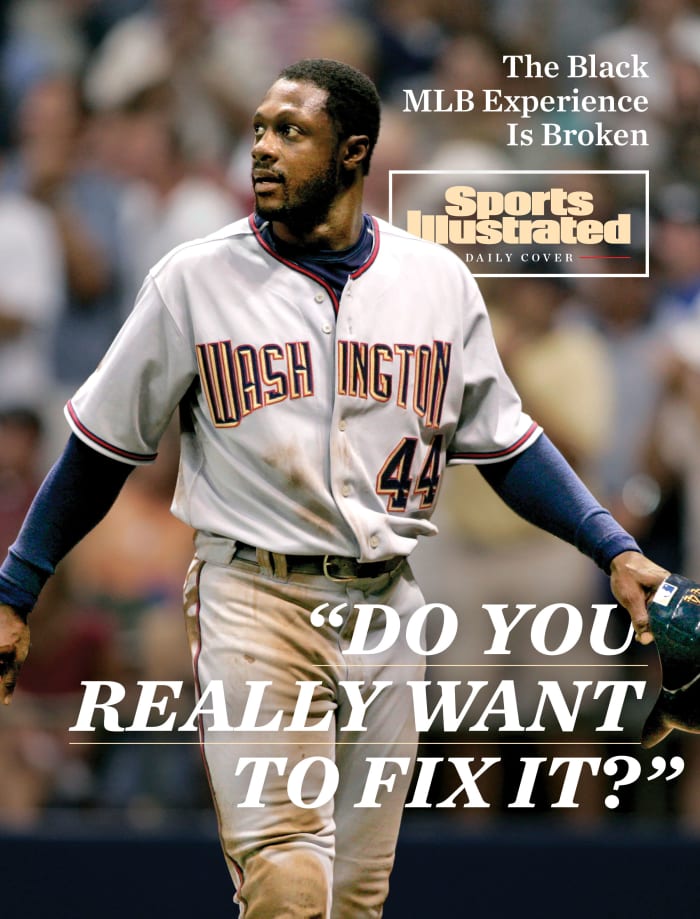 Still, the league that annually celebrates Jackie Robinson said it wanted to do the work, so Wilson quoted the tweet and wrote, “Give me a call.” But the commissioner’s office seems too worried about MLB to think about BLM. It has been 44 days, and no one from the league has called Wilson. That’s too bad. He has some ideas about why baseball has lost so much of Black America.

As his Cardinals recorded the final out of the 2006 World Series, Wilson ran in from left field, looking like a grinning embodiment of the game’s—and the country’s—racial progress. His great-grandparents were sharecroppers. His grandparents had to enter restaurants through the back door to be served. His father, Mets and Blue Jays center fielder Mookie Wilson, played 12 years in the majors and won a World Series, all while young Preston watched from up close. Preston became a first-round draft pick who would play 10 years in the big leagues. Now he was celebrating a championship.

Most fans probably did not notice, in the euphoria of the moment, that Wilson was the only Black player on the team. But he felt it every day. His experience in baseball told a story of isolation. His roommate with the Mets, Jason Isringhausen, had never lived with a Black person before. Throughout the minor leagues, Wilson often felt like an exchange student, trying to understand a strange culture. No one around him was familiar with his cultural touchstones. Instead he learned the lyrics to country music he’d never heard before. He practiced one-liners from Caddyshack and Airplane!. In his decade in the majors, he had teammates who came to his defense when fans yelled racist slurs at him. He also had a teammate who called him the n-word. He once observed a white teammate construct a noose in the clubhouse. It didn’t seem to be directed at him, but the teammate paled when he saw Wilson watching. He didn’t want a confrontation. He never brought it up.

According to the Society for American Baseball Research, MLB peaked at 18.7% African American in 1981. Last season, according to USA Today, that figure was 7.7%. Despite its attempts at fostering diversity at the youth level, baseball continues to lose Black athletes to sports such as basketball and football. The ones who stick with baseball, like Wilson, often report an oppressive loneliness.

How did baseball get here? And how do we fix it?

Baseball is an expensive sport: Many play year-round, spending as much as $4,000 to play in the winter. They return to their high school teams more polished—and more likely to get playing time—than the kids who can’t afford the extra coaching. According to the Brookings Institution, the average net worth of a white family in 2016 was $171,000. The average net worth of a Black family was $17,150. That alone puts young Black players at a disadvantage.

And baseball is a sport that, more than any other, rewards repetitions. Those can be hard to get: You can work on your jump shot alone. You can’t practice hitting a curveball unless someone is throwing it. And most often that requires a field, because kids don’t play stickball anymore. The world is getting faster. Baseball is getting slower. Former All-Star right fielder Ken Singleton, who is Black, learned the game with a broom handle just north of the Bronx, slicing line drives over the grocery store across Columbus Avenue. Today’s Ken Singletons are playing basketball in Rucker Park.

So for a Black boy to pursue baseball, he must live in a town where baseball is prominent, often a predominantly white town. Or he must love the game—played more and more by people who don’t look like him—enough to drag a few friends along. 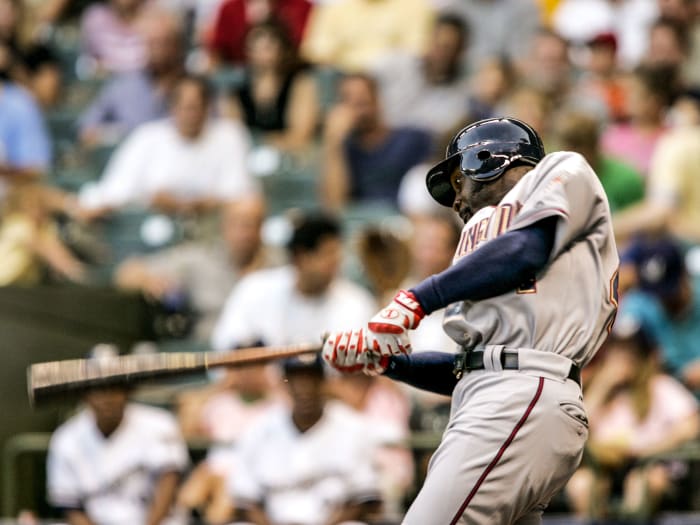 And if he is looking to sports as a way out, baseball is not the best option. The NCAA allows Division I schools to grant 85 football scholarships. Men’s basketball teams get 13. Baseball teams get 11.7 to distribute among their roughly 35 players. Very few players get a full ride. So if you can’t afford to pay your own way to college and you don’t get drafted, you’re out of luck.

“If you love baseball to death, at some point you’re going to have to decide, Is this financially viable for me?” Wilson says.

According to The New York Times, only 4% of NCAA baseball players were Black in 2018. Even many historically Black colleges have trouble filling out their rosters with Black players: At times last year, Bethune-Cookman did not start any.

So the ranks have thinned dramatically by the time players begin to enter the minor leagues. Then the culture shock hits. For everyone.

“There’s a lot of guys that come into MLB and, if they come out of high school, they may have never spent time alone in a room with an African American person,” Wilson says. “If they go to private school, there might not be any Black kids on the team. They’re definitely not gonna have a Black coach. So everything they’ve learned about African Americans, they’re learning from the news.”

Look around a baseball field, Wilson says. How many Black pitchers do you see? Black catchers? Those are the two most cerebral positions, the only positions that are proactive rather than reactive. Many coaches see Black players as pure athletes, getting by on talent more than baseball IQ. “You end up with Black outfielders and Black second basemen,” Wilson says.

Managers tend to be former pitchers and catchers—11 of the current 30 were one or the other—so Black players are less likely to get a shot at that job. Executives largely come from a different pipeline—and that one is even whiter. Wilson notes the underrepresentation of Black students at the most prestigious universities. Black people make up 13.4% of the U.S. population, according to the Census Bureau; a 2017 New York Times study found that none of the eight Ivy League schools, the University of California–Berkeley, Georgetown University, Haverford College or Williams College welcomed a freshman class that was more than 10% Black. Of the 29 MLB GMs (the Dodgers have only a president of baseball operations, Andrew Friedman), only six attended schools that were more than 10% Black. (Braves GM Alex Anthopoulos’s alma mater, McMaster University in Ontario, Canada, does not release statistics on students’ race.) 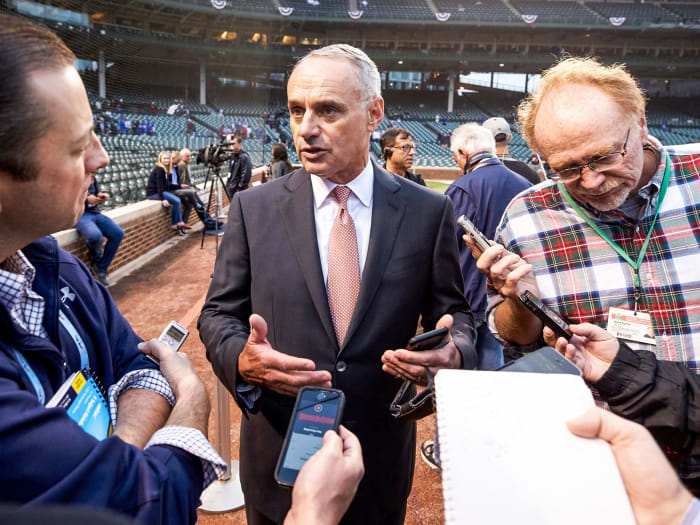 Manfred is commissioner of a league whose top executives are all white males.

And those are the people who release statements like the one MLB made about Floyd.

Wilson believes that very few white players have considered the question of diversity in baseball in detail, because it doesn’t affect them. And for that he blames everyone—including the media, which is largely white. Only half a dozen Black reporters cover baseball as their primary beat.

“I put this on reporters too,” he says. “Reporters don’t even ask white players about this. … We’re constantly reinforcing race by not forcing all Americans to answer for it. You don’t have to ask them the parts they can’t answer, about how it feels. Just: Do you think it’s wrong? If someone asked me about gay rights, I’m not gay, I don’t know what it’s like to be in that situation, but I do feel it’s wrong that someone is treating someone poorly because of their sexuality. I can say that’s wrong. I can say that all day.”

He has been heartened to see some white players expressing solidarity. The Astros’ Alex Bregman, the White Sox’ Lucas Giolito and the Mets’ Pete Alonso all have come out in support of the Black Lives Matter movement. But the one who most thrilled him was his childhood hero, Braves All-Star center fielder Dale Murphy, who tweeted that his son had been shot with a rubber bullet while protesting police brutality and added, “As terrible as this experience has been, we know that it’s practically nothing compared to the systemic racism and violence against Black life that he was protesting in the first place. Black communities across America have been terrorized for centuries by excessive police force. If you’re a beneficiary of systemic racism, then you will not be able to dismantle it at no cost to yourself. You will have to put yourself at risk. It might not always result in being physically attacked, but it will require you to make yourself vulnerable.”

There is a lot of work ahead, Wilson says, starting with a fundamental question he thinks the decision-makers at MLB should ask themselves: “Do you really want to fix it?”

That will require sacrifice, he explains, on many levels. The league needs to market its players better, to capture children’s attention. It must educate youth coaches about implicit bias and encourage them to offer opportunities to as many kids as possible. It should lobby for the right of college athletes to be paid for their likeness, which would make college baseball a more attractive path. Perhaps most helpful would be increasing the pay of minor leaguers, who are currently treated as seasonal employees exempt from minimum-wage laws and who sometimes make as little as $5,500 in a year.

MLB should expand its Diversity Fellowship Program, which began in 2017 and places women and people of color in league and team offices. And those offices need to recruit heavily for their internship programs at schools beyond the Ivy League. The bottom line is that more Black executives means fewer white executives. Does he think those white executives are willing to make the changes?

He pauses. “I’m not gonna put words in anyone’s mouth,” he says. “I don’t know what the answer is. I know what the outcome has been.”

And does he think there is hope?

He laughs. “There’s a lot of times, for African American people, all we had was hope,” he says. “So I’m hopeful.”

Thanks for visiting ! The use of software that blocks ads hinders our ability to serve you the content you came here to enjoy. We ask that you consider turning off your ad blocker so we can deliver you the best experience possible while you are here. Thank you for your support! Wait is there…